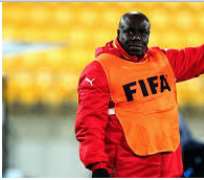 Sellas Tetteh has left his post as head coach of the Sierra Leone national team few days to the Afcon qualifiers against Nigeria.

According to Ghanasoccernet, The Ghanaian born gaffer tendered his resignation letter to the Sierra Leone Football Association President on Thursday and it has been accepted by Executive Committee.

The former Rwanda coach cited personal reasons for his decision to quit, this will come as a huge blow to Sierra Leone's preparation for the doubleheader against Nigeria.

The 63-year-old managed just one win in four games at the 2022 World Cup qualifiers, he lost twice and drew the other in the first three matches of the 2021 Nations Cup qualifiers.

The first leg is slated for March 27 at the Stephen Keshi Stadium in Asaba.