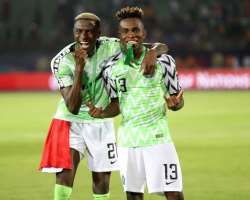 The Super Eagles of Nigeria is a young team with an average age of 24.1 and in this short piece, I will be looking at the three most valuable players in the team, let's go on a ride.

1. Samuel Chukwueze: The Villarreal star has been one of the standout U-20 players in the world since he broke into the club's first team in 2018.

He has been linked with move to Liverpool and Arsenal in the past due to his stunning performances for club and country.

He has played 24 matches for Villarreal in the league scoring three goals and recording three assists.

Chukwueze's buy out clause is €63 million because in La liga most clubs use buyout clause, which is not necessarily the player's value but any club interested in signing him will have to trigger the buyout clause.

Chukwueze made his Super Eagles debut in 2018, he has scored two goals in twelve matches for Nigeria.

2. Wilfred Ndidi: The Leicester City midfielder is another Nigerian player that has been consistent since he moved to Leicester City from Genk in 2017.

Ndidi is one of the best defensive midfielders in the premier league, he has been churning out impressive performances consistently, he has been compared to former Leicester City star, Ngolo Kante.

Ndidi has featured in 21 premier league matches for Leicester City this season with two goals and one assist to his name.

According to TransferMarket, Wilfred Ndidi's market value is €45.00m

3. Victor Osimhen: The Lille striker has been impressive this season after joining the French club from Charleroi.

He has wowed many in the Ligue 1 with his ability to score goals home and abroad.

He scored two goals in five champions league appearances including a memorable goal against Chelsea.

According to TransferMarket, Osimhen's market value is €30.00m.

He has been linked with the likes of Real Madrid and Barcelona because of his goalscoring exploits for club and country.

Osimhen made his debut for Nigeria in 2017, he has scored four goals in eight matches.