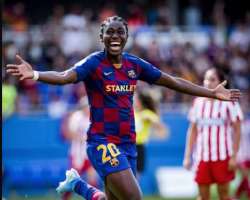 The former Arsenal striker has been on a superb run of form scoring goals with reckless abandon.

Marta Torrejon opened the scoring for Barcelona in the 33rd minute before Allexias Putellas added the second goal a minute later.

Stephanie Van Der Grat assisted Putellas to score her second goal of the match and the third goal for Barcelona late in the first half.

Just after the restart Van Der Grat turned provider for Oshoala in the 54th minute, 16 minutes later the Super Falcons captain added her second of the match finishing off an assist from Aitanna Bommati.

Super Zee as she is fondly called by her admirers completed the rout by adding the icing on the cake with another goal to complete her hat trick and hand Barcelona a big away win.

Oshoala has now scored 15 goals in her last 10 matches for Barcelona.

She has scored two hat tricks this season, 20 goals in 19 league matches.

Barcelona are 12 points clear of Atletico De Madrid on the log.