Champions League Preview: Dortmund vs PSG: All You Need To Know 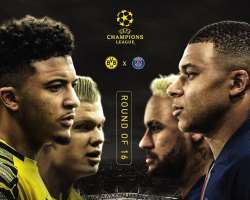 PSG and Borussia Dortmund will slug it out tonight in a champions league second round clash in Germany.

It promises to be an interesting match with both teams boasting of attacking players that can wow the spectators.

Dortmund finished second behind Barcelona in Group F with ten points, they have failed to reach the champions league quarter finals since the 2016-2017 season.

PSG finished on top of Group A five points clear of Real Madrid.

They will fancy their chances against Dortmund in other to stand a chance delivering the holy grail for their Qatari owners who have been been craving for champions league glory.

Players To Watch: Neymar: The Brazilian wizard on his day can be unplayable, he is back in the squad after a minor injury, he is expected to start for the Parisiens in Germany.

He will also be fired up to produce a big performance, because big players are made for big occasions that is why he is the most expensive player in the world.

Neymar has scored 18 goals in all competitions this season for PSG despite missing some games due to injury.

Mbappe: The former Monaco is arguably PSG's most important player right now with his impressive goal return and electrifying performances, Dortmund will be wary of him because he is dangerous.

He has scored five goals in five matches in the champions league this season.

Jordon Sancho: Sancho has been so impressive for Dortmund this season in all competitions racking up numbers coupled with various match-winning performances.

Sancho will cause problems for the PSG backline, the likes of Silva, Marquinhos will have to be on their toes to stop him from wrecking havoc.

He is in the form of his life, he will fancy an opportunity to show the world why he has been linked with top clubs in Europe.

He has scored two goals and two assists in the champions league this season.

Erling Haaland: Haaland has continued from where he stopped at Salzburg with his impressive run in front of goal, he joined Dortmund in the January transfer window and he has already won the Bundesliga player of the month with eight goals in five matches in just 311 minutes.

He is going to be a threat for PSG.
Head To Head: This is the third meeting between both teams, the first tie ended in draws in the 2010-2011 season.