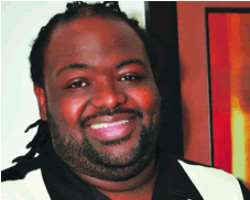 Coker
The day started out on a mild note. Not sunny and with a hint of slight rain that was to come. The showers, however, allowed for the arrival of the five finalists and the crew to The Place Hotels, Ajao Estate, Lagos, where the final segment of the essay competition held.

The event was set up in the context of a pseudo-reality television show. The technical crew from Zmirage Multimedia Limited arrived to set up lights, sound and the stage set; they got to work around 8am, creating the ambience for the show.

With hearts beating and brains working feverishly, pens and laptops ready to go, the competition commenced with a synchronization of time for the contestants so that everyone started at 1.06pm.

The narrator (Tina Mba) was a constant presence – the way invigilators usually do in examination hall – as she strolled among the contestants, checking to see what they were writing and commenting, probing their ideals and looking to see who was doing what?

Halfway through the essay writing, the contestants were asked if they wanted a short break, and when all declined, the writing proceeded.

The sounds in the room were that of frantic tapping of keyboards and the scribbling on papers without minding the sweat dripping from the brows as a result of the heat generated by the Television lights mounted at corners of the room. Also, the three cameras mounted in the room were at work recording all the expressions from the furrowed eyebrows and the adjustment of sitting positions.

At 2.06pm, the competition ended. The fringe time of 15 minutes was given so the camera angles and group shots could be adjusted and taken.

A break was taken from recording at this point as the judges collected on jump disc (computer flash) essays written on laptops and the hard copies of handwritten pieces from contestants who wrote in long hand.

The first session was over and what remained was for contestants to await with apprehension the results of the competition.

The second half of the pseudo-reality television show started about 4pm. The contestants were seated and awaiting the results. But before it arrived, the narrator came on and had interviews with the contestants, trying to ease their apprehension and make them feel comfortable as the atmosphere was charged.

With the interviews over and the judges back on set, the hearts of the contestants were beating palpably, their faces set to frown as some of them held their breath.

The contestants were moved from the table where they sat to write the essays to a couch, just beside where the judges were stationed; the narrator

sandwiched between both set, and acting as a middleman. One by one, the contestants were called to stand up and each judge gave his opinion on the three categories of the essay, the structure, style and content, stating the weak points in each essay and the strong points, if any. This gave the contestants an idea of what the judges thought of each essay.

Finally, the moment of truth arrived, the time for the judges to give the scores in each category. The tension heightened as the judges gave each contestant a breakdown of the scores based on style of writing; content and effectiveness of language deployed.

With the contestants holding their breaths, the final scores were given;

• Natasha Bassey; 5th
• John Okunola ; 4th
• Emmanuel Ugokwe; 3rd
With just Lawrence Wakdet and Gbenga Adeniji remaining, the question was who would win and who would be the runner up. Amid applause and celebration; Wakdet was announced as the first runner-up; while Adeniji was announced the winner of the Project Preemptive Essay Writing competition.

Prizes were announced for the five finalists: the fourth and fifth got consolation prizes of N25, 000 each; the third got N50,000 and the second N75, 000. The overall winner got N100,000 and a chance (if he has a visa) to see the play Preemptive on July 2 at the Shaw Theatre in London. All the five contestants will, however, see the play at venues in Nigeria.

The play, Preemptive, written by US-based Nigerian scholar, Niyi Coker will be staged next month at Muson Centre, Onikan, Lagos, in commemoration of the 76th birthday anniversary of Nobel Laureate, Professor Wole Soyinka.