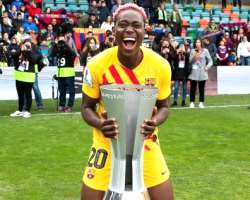 The Super Falcons striker also scored in the semi final victory over Atletico Madrid to continue her impressive form this season.

Caroline Graham Hansen and Candela Andujar added the other goals for Barca.

Oshoala has now scored 19 goals in 22 appearances in all competitions for Barcelona Femini this season.

The former Liverpool forward has enjoyed a fruitful time in Spain since joining the club in January 2019.

This is the first ever Spanish Women Super Cup and Barcelona Femini underlined their superiority in Spain to win the Trophy.

Barcelona are nine points clear of their nearest rivals Atletico in the league with 12 games to play.