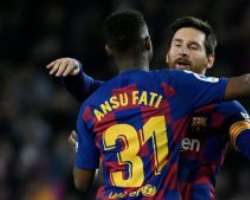 Barcelona starlet Ansu Fati has become the youngest player to score a brace in La Liga with his two goals in the first half of the 2-0 victory against Levante on Sunday.

The Guinea-Bissau-born attacker started the match in a three-man attack with Lionel Messi and Antoine Griezmann but proved to be the most lethal of the trio in front of goal across the opening 45 minutes.

With 30 minutes on the clock, Messi played a wonderful, defence-splitting through ball to set Fati through on goal, and the teenager took one touch to shrug off the defender before slotting home the opener.

Seconds after the restart, Fati again received the pass from Messi, before drilling a low shot into the net at the near post to become the league’s youngest ever brace scorer.

“It’s a dream. I always dreamed about this and it has been fulfilled,” Fati told reporters post-match. “Thank you all for this opportunity.

“They just told me [about the record], but hey, I have nothing to say, to keep improving and take every opportunity.

“My teammates make everything easier from day one and I’m grateful to each one. It’s not easy for them to behave so well and I’m very grateful.”

Fati made his debut for the Blaugrana this season as a 16-year-old and became the club’s youngest ever goalscorer – and the third youngest in La Liga – with his strike in the 2-2 draw against Osasuna in August.

The Spanish under 21 international also became the youngest ever goalscorer in the Champions League with the winner against Inter at the San Siro in December.

Fati has made 19 appearances for Barca so far this season, scoring five goals and getting one assist.

Barca’s manager Quique Setien might have to play Fati more in the second half of the season because of the long-term injury to Luis Suarez.

The Spanish tactician hinted the teenager could get exposed to more game time after the Catalan’s Copa del Rey win against Ibiza.

“The first thing we are doing is seeing the players in different positions,” Setien said.

“[Fati] has a lot of talent. We will see how he progresses. He will get more starting time as long as he keeps developing.”