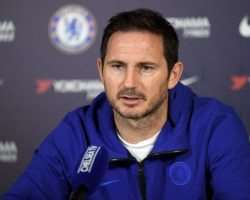 Lampard sprang a surprise in his team selection, with Kepa Arrizabalaga dropped to the bench, while Willy Caballero started in his place. Elsewhere, Reece James started at right-back with Cesar Azpilicueta on the left of defence, while Tammy Abraham returned from injury and there was no space in the 18-man squad for Olivier Giroud.

The Blues had plenty of good chances in the first half, but were wasteful in front of goal, while Abraham had a penalty shout turned down by referee Lee Mason, with VAR agreeing despite contact from Caglar Soyuncu.

But Lampard’s team took the lead just after half-time, with Antonio Rudiger heading home from a Mason Mount corner.

But less than 10 minutes later, the hosts were level, with Harvey Barnes’ shot deflecting past a helpless Caballero