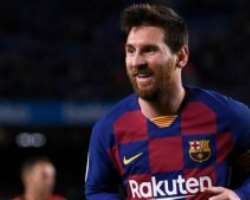 Lionel Messi has become the first player in the history of Spanish football to reach 500 wins, after Barcelona romped to a 5-0 win over Leganes in the Copa del Rey.

Messi was left out of Barca’s unconvincing round of 32 victory over Ibiza last week, but new coach Quique Setien restored the six-time Ballon d’Or winner to his starting line-up in Thursday’s last-16 clash.

Goals from Antoine Griezmann and Clement Lenglet gave the Blaugrana a comfortable half-time lead at Camp Nou, as they put the disappointment of a 2-0 La Liga defeat at Valencia on Saturday firmly behind them.

Messi made it three with a deflected effort just before the hour mark, before Arthur added some more gloss to the scoreline in the 77th minute.

Barca’s Argentine maestro grabbed his second of the night right at the death, smashing the ball into the roof of the net in sumptuous fashion after rounding the Leganes goalkeeper.

The result ensured that Messi earned his 500th victory in a Barca shirt – the most wins ever recorded by a single player in Spanish football.

It has taken 710 games in total for the 32-year-old to reach that mark, and he will likely add many more to his final total before he eventually calls time on his illustrious career at Camp Nou.

Barca are now safely through to the Copa del Rey quarter-finals, along with Real Madrid, Granada, Villarreal and Real Sociedad, and will now await their fate in Friday’s draw.

Messi’s latest double has taken his tally for the season to 20, and he will have the opportunity to add to his haul when Barca welcome Levante to Camp Nou on Sunday.

Setien’s men slipped three points behind Real Madrid at the top of La Liga after their loss at the Mestalla, but a third successive title is still within their grasps if they can string a run of wins together.

After their latest outing, Barca will look ahead to a meeting with Real Betis at Estadio Benito Villamarín, which comes six days before a home fixture against Getafe.