Di Maria: I have played with Messi, Ronaldo, Rooney & Ibrahamovic- Messi is the best 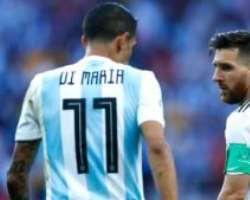 Paris Saint-Germain’s Angel Di Maria has played with some of the greatest players of his generation throughout a storied career that included spells at Real Madrid and Manchester United, but the Argentine feels that his country’s captain, Lionel Messi, is the best of the bunch.

Di Maria called the Santiago Bernabeu home for four years between 2010 and 2014, lining up alongside Cristiano Ronaldo as Madrid won the Champions League, La Liga and two Copa del Rey titles during his time in the Spanish capital.

An ill-fated spell at Man Utd followed, but while silverware may have eluded the Rosario native throughout his time in the Premier League, he did have the pleasure of sharing a pitch with England’s all-time record goalscorer, Wayne Rooney, a man he holds in high regard.

And while Di Maria admits that it was a dream to pull on the same shirt as some of football’s modern day greats, the highest praise was reserved for his countryman.

“It was a dream to have the possibility to play with [Wayne] Rooney, [Zlatan] Ibrahimovic, Cristiano [Ronaldo], Leo [Messi]… they were players that I used on the PlayStation and I would never have imagined I’d get to play with them,” Di Maria told TyC Sports .

“I used to watch them and then to have the opportunity to play with them was really nice.

“Leo is the best of the four, Cristiano is a monster and Neymar is simply a joy for football. He’s Brazilian and when he plays all he does is have fun.

“Ibra is crazy, a total character. On the pitch he might seem like a bad guy but he is awesome, a really good guy. I got along with him very well when he was here.

“Rooney is a quiet guy. I never thought he would be as strong as he is. With all the great players I have played with, it’s hard to choose. But if I had to pick one, it would be Leo.”

Another of Di Maria’s current team-mates was also singled out, with the Argentine tipping PSG star Kylian Mbappe to become the best player in the world if he maintains his current trajectory.

“Mbappe is a little animal,” Di Maria said. “He has a great mentality. He’s a good boy, always calm, and plays at a high level. Even with everything he has done, he can do more. If he continues with the mentality he has, I know that he will win the Ballon d’Or.”