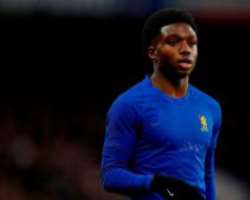 Lamptey opts for Brighton Chelsea’s Tariq Lamptey has shocked Frank Lampard by agreeing on a deal for an undisclosed fee to leave the club for Brighton in January after rejecting a contract offer with the west Londoners.

Brighton have been searching for a new right-back for the last two transfer windows and have assured the 19-year-old he will get his first-team chances under Graham Potter.

Lampard rated Lamptey highly and used him off the bench in the 2-1 win away at Hull City in the FA Cup which was his third appearance of the season.

The Blues have opted to cash in now with Brighton also able to wait and sign him for free in the summer. Brighton pushed to get the deal done with offers from Lille and Torino also on the table.

Paris Saint-Germain, Nice and Wolves were also monitoring the contract talks between Lamptey and the club but sources at other sides didn’t expect him to opt to leave his boyhood club.

Reece James’ presence is thought to be a key factor with the 20-year-old likely to be a threat to Lamptey’s regular first-team opportunities.

Tammy Abraham and Tino Anjorin are next scheduled for talks to renew contracts at Stamford Bridge after a host of other youngsters to do so this season.

They include the likes of Callum Hudson-Odoi, Mason Mount, Ruben Loftus-Cheek, Fikayo Tomori and James, who have all penned new deals after Lampard’s return to manage the team that he most notably played for.

Chelsea have been hoping to sign Napoli’s Dries Mertens from Napoli although the Serie A club have pushed back on all their offers with the Belgian unwilling to force through a move.

Time is now running out for Lampard to get the striking reinforcements that he wants with little time to agree a deal for Mertens or for them to work on other targets.

Chelsea also tried to sign PSG’s Edinson Cavani but those approaches were unsuccessful with the Ligue 1 side quoting a high price and the player wanting to move to Atletico Madrid in the summer.

Olivier Giroud may find his exit blocked from Chelsea with Tottenham his preferred option but the Blues reluctant to strengthen a top-four rival in January. Lazio are also in the market for Giroud but his family now wants to stay in London having been given the option.