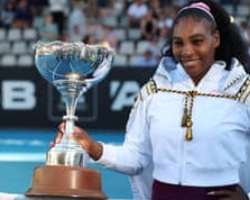 Serena Williams has won her first title since becoming a mother.

She had not won a singles title since the Australian Open in January 2017.

Serena Williams gave birth to her daughter, Alexis Olympia in September 2017 and she has had to wait for a silverware to celebrate the birth of her daughter.

Olympia was at the court-side cheering her mother to victory.

"It feels good. It's been a long time," Williams said during the post-match interview.

I think you can see the relief on my face. I played an incredible opponent today in Jessica and, honestly, it was a great match and I couldn't have played anyone better in the final."

She announced that her prize money of $43,000 will be donated to the victims of the Australia bushfires.

Williams will be hoping to add to her Australian Open collection when the tournament kicks off on January 20.