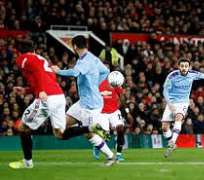 Bernardo Silva opened the scoring with a superb effort from the edge of the box, before Riyad Mahrez increased the lead by rounding David De Gea after a superb team move to give City a 2-0 lead.

Manchester City were without Sergio Aguero and Gabriel Jesus but they breezed pass Manchester United at will with reckless abandon.

De Bruyne twisted Phil Jones inside out before unleashing a low drive effort which was saved by De Gea but it ricocheted off Pereira to sail into the net.

The first half ended 3-0 in favor of Manchester United as they put one step in the final of the competition, United came out in the second half to reduce the damage but City held on to victory.

Marcus Rashford reduced the deficit with a consolatory goal in the 70th minutes.

"The last game against United [a 2-1 loss in December] we could not control when we lost the ball, and tonight we did it better.

"We lost the ball in a position which is so dangerous [for the United goal].

We cannot forget which team we play. Tonight we can be more than satisfied to come here to Old Trafford and win.

"It is not over. We have one more game and we'll see what happens.

"Of course Manchester United can come back. Last year here they lost to Paris St-Germain [in the Champions League] and qualified. They have the shirt which means history and pride.

Manchester City will welcome Manchester United at the Etihad in the second leg on Wednesday, 29 January.