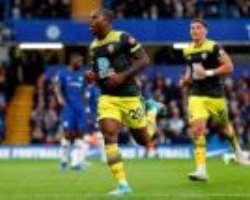 Obafemi opened the scoring a curling effort in the first half when Chelsea defenders failed to clear their lines.

The Republic of Ireland international scored his first premier league goal in a over a year to give Southampton the lead.

He impressed with his hold up play and troubled the Chelsea back line with his powerful style of play.

Michael Obafemi was born in Dublin to Nigerian parents and was brought up in London.

He was eligible to play for Republic of Ireland, Nigeria and England.

Obafemi made his debut for Republic of Ireland in November 2018.

He has scored two goals in twelve appearances for Southampton in the premier league.

Redmond finished off a brilliant team move to condemn Chelsea to another defeat.

Chelsea have lost five out of their last seven premier league matches and their home form has been poor losing to lowly teams at Stamford Bridge.