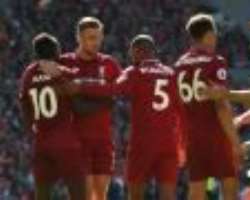 Liverpool defeated Monterrey 2-1 to qualify for the FIFA World Club Cup final in Doha on Wednesday.

Naby Keita gave Liverpool an early lead to the delight of everyone in the crowd at the Khalifa International Stadium.

The CONCACAF Champions League Champions proved stubborn for Liverpool to break down by denying them the space to hurt them.

Roberto Firmino replaced Divock Origi with five minutes to go before he scored the winner with a cool finish to guide Liverpool to the final on Saturday.

Liverpool will slug it out with Flamengo on Saturday in the final.

"It was a tough game. They were very aggressive against us. I think the referee didn't protect us too much but I'm not here to complain about it," said Mohamed Salah after being named the man of the match.

"But I think in the end we showed our quality and we won in the last minute so I think we deserved it."

Liverpool will be aiming to add the world club cup trophy to end 2019 on a winning note having won the Champions league and the Super Cup.