Why I Left Chelsea To Join Leganes - Omeruo 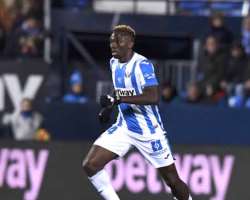 Former Chelsea defender Kenneth Omeruo has revealed his reasons for leaving Chelsea to join Leganes on a permanent basis in the summer.

The Super Eagles defender joined Chelsea from Standard Liege in 2012 but he failed to make a single appearance for the premier league club.

He was sent out on loan to several clubs including Ado Den Haag, Kasimpasa and Alanyaspor in the Turkish league.

Omeruo joined Leganes permanently in the summer after impressing while on loan last season.

“Every year I thought it was the opportunity to play for Chelsea, but in the end, it didn’t come. So, last season I told them, ‘Let me go play in LaLiga and see if I have the quality ,” Omeruo told AS.

“I had several options, but the coach at the time (Mauricio Pellegrino) gave me a lot of confidence and told me that he wanted me to stay.

“The club made an effort to sign me. I didn’t think they could buy me from Chelsea, but they got me.”

Omeruo has been a regular for Leganes this season as the club battle for Laliga safety.