Akpeyi Named Player Of The Month In South Africa 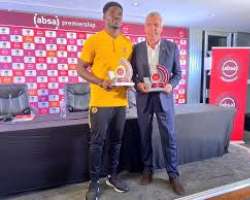 Super Eagles Goalkeeper Daniel Akpeyi has been named the player of the month for October in the South African top flight league.

Akpeyi has been impressive for Kaizer Chiefs this season and has established himself as the first choice goalkeeper following injury to Itumeleng Khume.

He made his 9th league appearance on Wednesday night in a 4-0 away win against Stellenbosch FC at the Cape Town Stadium.

The Nigerian International said he was surprised to win the award

“It is (award) a big surprise to me, but it also shows the importance of putting effort forward in whatever you do.

I give credit to the technical team who have been patient with me,” Akpeyi told a news conference on Thursday.

“I’m settling in, I’m taking each game as it comes. Khune is a good keeper, I’m just grateful for the opportunity from the coach.

It’s a healthy competition in that department [goalkeeping]. I’m just happy to be improving all the time.

Akpeyi was in goal for Nigeria in the 2021 Afcon qualifier against Benin and Lesotho.