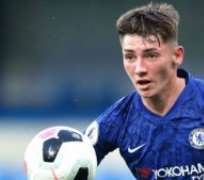 Billy Gilmour starred for Chelsea on his full debut against Grimsby, with the 18-year-old eager to point out that he does not suffer with nerves or shyness.

He proved as much with his performance in a Carabao Cup third-round clash that the Blues secured a stunning 7-1 success in.

Gilmour pulled the strings for Frank Lampard's side in the middle of the park, with his first start at senior level seeing him put in an eye-catching display.

The talented teenager had already been handed his competitive bow in a Premier League meeting with Sheffield United and is taking a meteoric rise to prominence in his stride.

He puts that down to his roots, telling Chelsea's official website of his ability to slip seamlessly into a star-studded squad: “I'm Scottish!

“No, I'm not shy. On the pitch it's football. If you're not going to talk, what are you doing on the pitch? You need to communicate. I love football, a big part of my game is communicating.

“I'm just taking it a step at a time. I've got the 23s, we're doing really well there. Of course, I want to get as many opportunities with the first team as possible. I just need to keep training hard and working hard.”

Gilmour looked comfortable for Chelsea in a deep-lying midfield role.

He has earned plenty of praise for the ease in which he had made a step up from the academy ranks, with the Scotland U21 international delighted to have been given a grand stage on which to show what he can do.

The highly-rated youngster added: “It was a really good feeling to make my full debut, and it was really good to get the win.

“It was breathtaking. It was a great night to walk out in front of all the Chelsea fans. And the boys performed really well. You could see the attacking threat we had with the goals.

“The gaffer has come in and wants to play the youth. It's been a really good experience for us and we're gaining confidence from it. I have worked hard for this so it wasn't a shock, but I had to step up and show what I'm capable of. I think I played well.”

If Gilmour remains part of Lampard's League Cup plans then he may get the chance to line up against Manchester United in round four, with a heavyweight encounter having been pulled out of the hat.

Photo:
The highly-rated youngster made his full debut in a Carabao Cup clash with Grimsby, having already been handed his senior bow in the Premier League