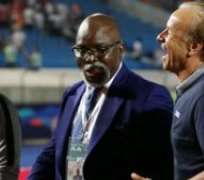 Super Eagles coach, Gernot Rohr has revealed that he has submitted the list of players he intends to use for October 13 international friendly match against Brazil in Singapore to the Nigeria Football Federation (NFF).

Nigeria will play against Brazil in an international friendly in Singapore on October 13.

Looking forward to a tough game against the record World Cup winners, Rohr told completesports.com that he was not toying with game hence he has decided to play with the best available players in Singapore.

“I am glad that we have all the Super Eagles regulars back in training and playing for their respective clubs, so I have to play my best players against Brazil. It's a good test game and we shall give it our best shot ahead of our AFCON qualifiers against Benin Republic and Lesotho,” stated.

“Brazil have invited their best players to tackle us and we cannot afford to toy with our list of players. I have submitted the list of players I think will give a good game to the South Americans. NFF should release them list soon.”

Rohr revealed that the Nigerian federation was working hard to get an African opposition to shape up the Super Eagles after the Brazil game ahead of the qualifiers.

Among players expected to be in Rohr's list for the game against Brazil are Francis Uzoho and Joe Aribo, as well as skipper Ahmed Musa, Wilfred Ndidi and Kenneth Omeruo, who missed the friendly game against Ukraine will return.

Meanwhile, 2016 NPFL champion and Head Coach of Nigeria's Super Eagles B team, Imama Amapakabo has revealed that players and coaches in the country aren't teachable.

Imama won the League title in his first full season as Enugu Rangers' Head Coach, and went on to become an assistant Coach in the Super Eagles.

Recently, he was handed the roles of Olympic Eagles and Super Eagles B coach, leading the sides on continental competition qualifiers.

He qualified for the Africa U23 Cup of Nations defeating Sudan 5-1 on aggregate, but saw his make shift team walloped 4-1 by minnows Togo in an African Nations Championship.

With his team now facing an uphill task to reach the CHAN next year, the Coach, stunned most with his scathing assessment of players in the league, including contemporary coaches.

As part of the Super Eagles backroom staff, Imama and Head Coach, Gernot Rohr have come under constant pressure to include more home-based (NPFL) players in the first team.

However, the argument against holding the doors wide open for the NPFL stars is the irregular schedule of the league and quality of the players in comparison to their foreign based counterparts.