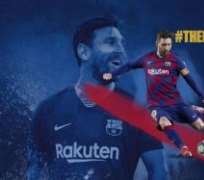 Barcelona's Lionel Messi and the USA World Cup winner Megan Rapinoe have been crowned players of the year at Fifa's The Best awards, held at the stunning Teatro alla Scala.

With 21 of the 55 nominees playing in England, it was natural that the Premier League would dominate the men's awards, but there was surprise as Messi beat Virgil van Dijk, who lifted the Uefa player of the year trophy, to the main prize.

The Argentina forward collected his sixth Fifa title, to make him the outright record holder ahead of an absent Cristiano Ronaldo, who has won five. Messi helped fire Barcelona to the 2018-19 league title and a staggering 54 goals in 58 games no doubt helped swing the vote in his favour.

Alisson collected the men's goalkeeper of the year award and was named in the Best men's XI, while Jürgen Klopp collected The Best men's coach award, beating Mauricio Pochettino and Pep Guardiola.

On accepting his award the German announced he has joined the Common Goal campaign launched by Juan Mata, where stars donate 1% of their wages to sporting charities. “I don't 100% understand individual prizes,” he said.

“We are very fortunate, we've had a very fortunate past and present and hopefully we will have a very fortunate future. But there are people out there that aren't in the same place and that is why tonight I want to announce that I've joined the Common Goal campaign.”

Of Van Dijk he said: “It's really nice that Virgil has got his reward now. He doesn't have to win it. Just go through the names: Cristiano Ronaldo, Lionel Messi and Virgil van Dijk. That's already crazy and I'm really happy for him and the other boys.”

Rapinoe, who stole the show on and off the pitch at the World Cup, finishing with the golden ball, golden boot and World Cup trophy, while using her platform to challenge Donald Trump and push Fifa on investment, was, for once, “a little at a loss for words”.

“That very rarely happens to me, she said before thanking her teammates “who let me be a little bit wild at times but reel me in when needed”. She then, characteristically, used her platform as a call to arms.

“Stories that have inspired me most; Raheem Sterling and Kalidou Koulibaly, the young Iran woman who burnt to death, the one out MLS player, the out NWSL players,” she said.

“If we really want to have meaningful change everyone needs to be outraged. That would be the most inspiring thing to me.

“We have so much success, we have incredible platforms. I ask everybody here to lend your platform, to lift people up, to use this beautiful game to change the world for everyone.”

England's Lucy Bronze, widely recognised as the best defender in world, missed out on the main award to Rapinoe, but was proud to be representing English football at the awards. “The whole England team is improving, the fact that we made three consecutive semi-finals is a good reason for that,” said Bronze, who was named in the women's Best XI of the year. “Teams grow and we've got a lot of talent. I know Kelly Smith has been to these kind of events before and in the future we're going to have more and more England players, I hope so anyway.”

The England manager, Phil Neville, agreed. “That's what I'm proud of,” he said. “Jill Scott, Steph Houghton, Ellen White, they deserve to be at awards of this type after a fantastic World Cup and we've got players at the top of the game.”

On her manager's belief that she should lift the trophy, Bronze said: “I can imagine. I know what he's like, I'm happy to be here and I'm happy to be in the top three after such an up-and-down season. A good season with Lyon, we won a lot, and then the World Cup was heartbreaking but I think that's why the other two had more of a chance.”

Jill Ellis collected the women's coach of the year award following her second successive World Cup-winning campaign with the US women's national team. The 53-year-old has announced she is stepping aside to take an ambassador role with US Soccer and Neville was full of praise for his semi-final opponent: “When you win a World Cup, I think you should win the top award and I'm glad everyone has voted for her like I did.”

Ellis said, on collecting her award: “What a ride. I want to thank Phil Neville and Sarina Wiegman for making my job hard. The World Cup really was a showcase. I think the world fell in love with our game.”

The former Arsenal goalkeeper Sari van Veenendaal, who joined the Spanish champions, Atlético Madrid, after her World Cup heroics for the Netherlands, collected the inaugural women's goalkeeper of the year award.