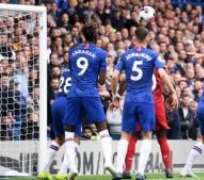 Jose Mourinho was concerned to see Chelsea's fans applaud their team from the pitch after a second defeat at Stamford Bridge in six days.

The Blues are still without a win at home under Frank Lampard, but the home support expressed their admiration for a promising performance in Sunday's 2-1 defeat by Liverpool.

But former manager Mourinho, whose old Chelsea side was renowned for being near-invincible at home, thinks such a reaction can spell the beginning of the end for a club at the top.

“I hope they don't get used to it,” Mourinho said of the defeat on Sky Sports .

“That's a very important thing, because when you start accepting defeats just because your team played well and just because your players gave their best, a performance for people to be proud of… I think when you get used to it, that's when the big clubs stop being big clubs.

“So I don't think they should get used to it. But I think it shows that the people are ready for what the season is going to be for them.

“They are ready to support one of the best professionals that I have ever worked with, a manager with potential.”

After seeing a Cesar Azpilicueta goal ruled out for offside, Chelsea went into half-time 2-0 down to goals from Trent Alexander-Arnold and Roberto Firmino.

Mourinho says he likes what Lampard is trying to do at Stamford Bridge, but had a note of caution ahead of what he sees as a difficult season.

“You look today at the performance and the result and the reality of the numbers is that Liverpool are 10 points ahead of Chelsea,” he said.

“So let's make it clear and objective: Chelsea are not going to fight for the title. So let's support what looks like is their philosophy, which is to give time to the players and to the manager.

“I like their idea of play. I think the style of play that they are trying to play is clearly adapted to what football is nowadays and is adapted to the players they have.

“But in this moment I think they are too far [behind] to compete for the title, so even when the transfer window opens for Chelsea it's not going to be with one or two players that they will become a force to fight for the title.”