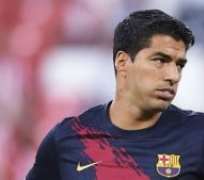 They are without a win in seven away games in all competitions, while their start to the new LaLiga campaign is their worst in 25 years.

Regardless of their poor form, Barca are only three points off the top of the table and Suarez called for Ernesto Valverde’s side to buck up their ideas quickly.

“It is a defeat that worries and hurts, and we have to look at many things,” he said after the game.

“We must be self-critical in order to improve.

“After going behind in the first two minutes it was difficult for us.

“We have to be more forceful to win the title. We must be self-critical.”

Suarez, though, said it is inappropriate to consider Barca’s slow start an extension of their underwhelming end to the 2018-19 campaign.

“It is not necessary to mix with the ones from the last year,” he added.

“We must analyse the first games that we played as visitors, that obviously worries us with the lack of effectiveness.”