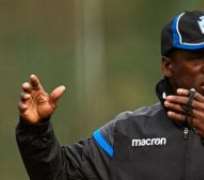 The statement added that Cameroon World Cup hero Francois Omam Biyik will serve as his deputy.

Details about the contract were not disclosed.
The 57-year-old journeyman has had 16 different coaching posts in the last 15 years.

He replaces Clarence Seedorf, who was dismissed after Cameroon lost in the last 16 of the Africa Cup of Nations in July.

It is the first national team job for Conceicao, who last worked at CFR Cluj in Romania.

He has coached at nine different Portuguese clubs and also had briefs spells at clubs in Cyprus and Saudi Arabia.

Omam Biyik scored the goal that allowed Cameroon to beat holders Argentina in the 1990 World Cup, when they reached the quarter-finals. He also played at the 1994 and 1998 finals.

Omam Biyik, 53, has coached clubs in Gabon, Mexico and Togo.

He returns to the national team coaching staff where he was previously assistant coach to Javier Clement from 2010-11.

Cameroon are set to host the next Cup of Nations finals in 2021. The first match in charge for the new coach will be a friendly against Tunisia on Oct. 12. (Reporting by Mark Gleeson; Editing by Pritha Sarkar)