Parenthood has not hurt our sex life; in fact that's the opposite of our experience: Kylie Jenner, Travis Scott 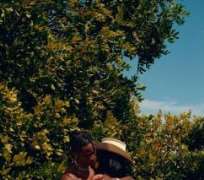 New parenthood can often make it difficult to find time for intimacy, but that hasn't been the case for Kylie Jenner and Travis Scott.

The couple — who share 19-month-old daughter Stormi — opened up about their relationship (and sex life!) in a cover story for Playboy's “Pleasure Issue,” where they admitted the arrival of their daughter on Feb. 1, 2018, hasn't gotten in the way of them continuing to connect on a physical level.

“A lot of people claim that having a baby can hurt your sex life, but I feel like that's the opposite of our experience,” said the “Sicko Mode” rapper, 28.

Added the 22-year-old Keeping Up with the Kardashians star, laughing, “Yeah, I feel like we've definitely proven that rumor to be wrong.”

On the contrary, “You remind me that motherhood and sexuality can coexist, and just because you embrace your sexuality doesn't mean you have loose morals or you're not a good mother,” Jenner told Scott, who also creatively directed the shoot and posed  alongside his girlfriend for the eight-page spread .

“You can be sexy and still be a badass mom,” the Kylie Cosmetics mogul added.

Acknowledging that they've had their fair share of highs and lows like any other couple, Jenner said weathering tough times has only helped them grow closer together.

“We think the same and have the same goals and passions in life. Besides the fact that we have good chemistry, we have a lot of fun together,” she told Scott when he asked why she  thinks their relationship has been successful . “You're my best friend. Through all the ups and down that every relationship has, we evolve together through them and keep getting stronger.”

Stormi recently joined her mom in the hot seat for  Ellen DeGeneres ' viral segment “Burning Questions,” where the  little girl had the cutest response  to Jenner asking her, “Who loves you the most?”

After she said, “Daddy,” the mother of one shrugged and quipped, “Every time!”

Elsewhere  in the segment , Jenner called Stormi “the best gift” she has ever received from Scott, whom she also later joked “smells like weed a lot.”