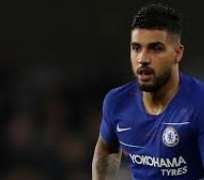 Chelsea left-back Emerson Palmieri limped off after just seven minutes of Italy's Euro 2020 qualifier at Finland on Sunday night, with what appeared to be a thigh strain.

The 25-year-old, who has been in good form for Frank Lampard's side so far this season, lined up alongside Blues team-mate Jorginho but was replaced by Roma's Alessandro Florenzi with the game in its early stages.

If it is an injury which keeps him out for some time, it will come as a significant blow to Chelsea. His fine performances have seen him  open talks over a new contract at Stamford Bridge  , and he has spoken about being in the form of his life.

He had previously played 90 minutes for Roberto Mancini's Italy side in their 3-1 win over Armenia on Thursday evening. Italy started Sunday's game three points clear of Finland at the top of Group J, with five wins and one draw from their first six games.

Emerson will likely be replaced in Chelsea's starting XI by 28-year-old Marcos Alonso, who has dropped down the pecking order this season.

However, Blues fans could be concerned with the Spanish international  having struggled to perform in a back four  in the past – and Lampard isn't likely to alter his preferred system to accommodate him.

Alonso's presence meant that Emerson initially struggled to assert himself in the Premier League following his €20 million (£18m/$22m) move from Serie A side Roma in January 2018, making 39 appearances for the club to date.

But, given attacking licence in Lampard's noticeably cavalier system, he has looked a threat from the left in all of Chelsea's games so far and has gone close to scoring on numerous occasions.

Despite his own eye-catching performances, Chelsea haven't exactly been their old imperious selves at the back. They are yet to keep a clean sheet in their five matches so far this season and have conceded at least twice in three of their four Premier League games.

They will have to be at their best if they are to improve on that record after the international break. A difficult trip to Molineux to face Wolves is followed by a Champions League clash with Valencia, before they welcome table-topping Liverpool to Stamford Bridge on September 22.