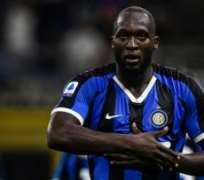 Milan (AFP) – Inter MIlan striker Romelu Lukaku was targeted by racist chanting on Sunday before slamming home the winning penalty in his side’s 2-1 Serie A triumph at Cagliari on Sunday.

Lukaku was preparing to take a penalty in the 71st minute in Sardinia when monkey chanting that continued for several seconds could be heard from the crowd.

The 26-year-old Belgian international angrily looked towards the stands before converting the winning spot-kick, which came after Lautaro Martinez’s 28th minute opener for the away side and Joao Pedro’s leveller four minutes after the break.

Lukaku was quickly surrounded by his teammates with the match continuing without being stopped by the referee.

Italy striker Moise Kean had also been the victim of racist chants at Cagliari after he scored a goal there for his former team Juventus last April, as was his French teammate Blaise Matuidi.

Ex-Chelsea and West Bromwich striker Lukaku arrived in Italy from Manchester United for 65 million euros ($73 million) this summer and has scored two goals in as many Serie A matches.