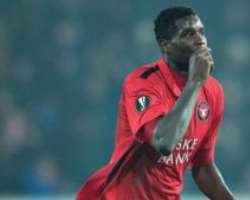 Paul Onuachu has left FC Midtjylland for Belgian top-flight side Genk in a deal reportedly worth €6 million.

The Nigeria international, who has six caps, left his boyhood club to take up a four-year contract at Luminus Arena.

During his time at MCH Arena, Onuachu played 181 games and was on target 74 times. He played a key role in their Danish Cup triumph last season.

Meanwhile, Midtjylland sporting director Svend Graversen has lauded the Nigerian for his contribution during his time at Wolves.

“He entered the academy and developed quietly, both as a human and a player, and many in the club, ranging from the foster family to the coaching staff, have a stake in the fact that we now sell Paul to a strong and big club like KRC Genk,” said Graversen.

“It is a fantastic sale for the whole club, we wish Paul all the best in the future, and of course we thank him for all he did for the club.”

Felice Mazzu is likely to hand Onuachu his debut against Anderlecht on Friday. Against Les Mauves et Blancs, the 25-year-old will be hoping to form a solid partnership with compatriot Stephen Odey in the Smurfs' attack.