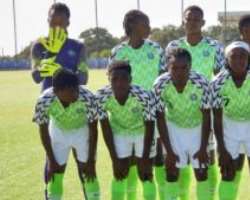 Nigeria U20 women’s team are through to the 2019 African Games semi-finals after earning a 1-1 draw against Cameroon in Rabat on Wednesday.

The Falconets went into the encounter on the back of Saturday’s opening 3-0 triumph over South Africa.

On the other hand, Cameroon aimed to seal their passage to the semi-finals after getting a walkover against Zambia following their withdrawal from the competition.

The Central Africans started the encounter brightly and were rewarded with a lead through Claudia Dabda in the 26th minute.

In the second half, the West Africans came alive in the contest and found a breakthrough when Chinyere Igbomalu levelled matters seven minutes after the restart.

The two sides pressed high in the final stages but neither could find the back of the net before they shared the spoils at Stade des Chenes.

The result means Nigeria are through to the next round with four points after two games, while Cameroon will have to battle South Africa for the other place in the last four on Saturday.