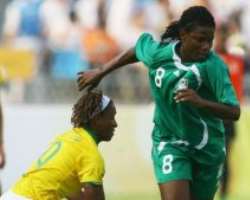 According to the NFF, the former Super Falcons forward passed on at the age of 36 following a brief illness on Wednesday.

Chiejine had featured for several clubs across Europe, USA before her final professional stint with Zvezda Perm in Russia.

The ex-Kairat Almaty star captained Nigeria to the inaugural FIFA U-19 Women’s World Championship [now U20] in Canada in 2002, and also won the African Women's Championship that year.