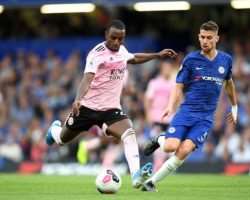 Frank Lampard's wait for his first win as Chelsea manager has extended further after his side were held 1-1 by Leicester City in a pulsating Premier League game at Stamford Bridge. Mason Mount opened the scoring after robbing Wilfred Ndidi of possession on the edge of his box but the Nigerian made amends by netting the equaliser with a thumping header from James Maddison's corner. Here are some of the main talking points. Mason Mount off the mark Plenty of Chelsea players appear to have benefited from the club's new youth-orientated philosophy under Lampard but none more so than Mount who developed impressively under his childhood idol during a season-long stint at Derby County. Lampard clearly has great belief in the 20-year-old and his faith seems well-placed judging by Mount's performance on his home debut. Chelsea started the game at a frenetic pace and Mount epitomised their desire to press from the front by robbing Ndidi on the edge of his own box before slotting past Kasper Schmeichel. It was a goal all of Mount's making and one he revelled in as he soaked up the adulation from the Chelsea supporters in the stands. A Chelsea player since the age of six, Mount is precisely the kind of homegrown hero that the club has been crying out for. Mason Mount scored his first senior goal for Chelsea against Leicester (Picture: Getty) He could even have had a perfect hat-trick inside the opening 20 minutes, forcing Schmeichel into a smart stop with his left-foot, converting a similar chance on his right and then heading tamely at the Leicester 'keeper when perhaps he could have shown greater conviction. Lampard made a career out of arriving into the penalty area at the optimum time to score and encouragingly for both him and Chelsea, Mount seems to have a similar knack of finding pockets of space in dangerous areas. Pressing key to Lampard's philosophy As a natural consequence of a heavy 4-0 defeat, it was largely forgotten that Chelsea had made an extremely lively start against Manchester United at Old Trafford, hitting the post through Tammy Abraham after four minutes and generally dominating proceedings early on. The same was true again against Leicester as Chelsea flew out of the blocks to unnerve and unsettle their well-fancied opponents. The speed with which Chelsea moved the ball and the intensity with which they pressed was something to behold in the opening stages. Wilfred Ndidi was dispossessed on the edge of his own penalty area by Mason Mount (Picture: Getty) Leicester, themselves a youthful, energetic side, simply could not cope with their hosts early on. Mount's goal epitomised Chelsea's tactic of applying pressure on the ball as he closed down Ndidi aggressively, nicked the ball off him and then finished. Clearly, Lampard has instructed his charges to press high up the pitch and with an attacking triumvirate of Mount, Pedro and Christian Pulisic buzzing dangerously around their opponents, he has the perfect players to carry such a plan out. James Maddison takes centre stage If the first half was all about Mason Mount, the second was about James Maddison. It was a battle of two young English No.10s that will have delighted Gareth Southgate no end, even though he surprisingly opted to take in Sheffield United against Crystal Palace instead. Similarly to how Mount has started this season, Maddison looked a natural at Premier League level from the moment he joined Leicester from Norwich City, creating more chances (a perfect 100) than any other player in the division in his debut campaign. James Maddison looks to evade N'Golo Kante at Stamford Bridge (Picture: Getty) Should he stay injury-free, he could end up topping that chart again as he was the chief protagonist in all of Leicester's bright moments in the second half. Early on in the half, he embarked on a mazy solo run inside the box which came to nothing before fizzing a low cross right through Chelsea's six-yard-box. After trying to slip Jamie Vardy through on goal throughout the second period, Maddison finally got his assist with a pinpoint corner for Ndidi and he should have capped an impressive display with the winning goal, blazing the ball high over the bar from close-range.