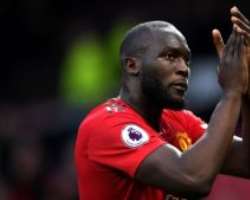 Romelu Lukaku marked his first appearance in an Inter shirt by scoring four times in his new side’s emphatic win against Virtus Bergamo.

The Belgium international completed his protracted move from Manchester United on Thursday in a reported €80 million (£74m/$90m) deal, ending weeks of speculation.

He did not feature at all for United during their pre-season campaign, and spent some time training back in his native Belgium with Anderlecht as he sought match fitness. he forward wasn’t ready for Saturday’s friendly trip to Valencia, left out of Antonio Conte’s matchday squad entirely for a game which Inter eventually won on penalties after a 1-1 draw.

However, he was part of a much-changed side that took to the field for a low-intensity encounter against Serie D minnows Bergamo on Sunday.

Handed the number nine jersey, previously warn by Mauro Icardi, Lukaku made a good first impression as he netted half of Inter’s goals in an 8-0 thrashing.

Matias Vecino and Sebastiano Esposito, two other players in need of minutes, scored braces to complete the rout.

Lukaku will have been relieved to finally see his name back on the scoresheet, with his final goals in a Manchester United shirt coming against Southampton more than five months ago.

He will hope to have impressed sufficiently to merit a starting berth for Inter’s first game of the Serie A season, as they host newly-promoted Lecce at San Siro on August 26.

They then look forward to fixtures with Cagliari and Udinese, before the first Milan derby of the new campaign on September 21.

Inter are hoping to build on a fourth-place finish last season, as they took until the final day of the season to confirm their Champions League place for the coming year under Luciano Spalletti.

They ended the season 21 points behind perennial champions Juventus and, having been backed with funds in the transfer market, Conte will be expected to close the gap.

Wingers Valentino Lazaro and Matteo Politano have been brought in alongside Lukaku, and there could be further activity from Conte in the window if Ivan Perisic’s expected move to Bayern Munich goes ahead.

With the Croatian looking set to return to the Bundesliga, Inter would have until the Serie A transfer deadline on August 23 to find a replacement, should Conte choose to.