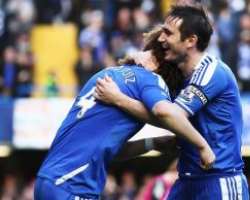 David Luiz has never said a bad word about any manager, not Conte, not Mourinho, certainly not Sarri, and not Lampard since he was appointed this summer, but it would appear that below the surface, something wicked has been simmering.

While no one's saying anything outright just yet — Lampard is scheduled to “comment” on all this on Friday, but that will be after the transfer deadline — it would appear that some discontent has been brewing for some time. One has to read between the lines a little bit, but reports such as in this one in the Mirror (grains of salt and all, but that applies to this whole situation) make it explicit that Lampard would be “happy” to sanction that sale of the 32-year-old veteran defender, who looked set to be first-choice, at least at the start of the season.

CarefreeYouth
@CarefreeYouth
Luiz update? He signed a new deal so we didn't lose him on a free. He's now going to be fourth choice when Rudiger is fit so….

953
5:43 PM – Aug 7, 2019
Twitter Ads info and privacy
202 people are talking about this
But maybe that wasn't actually the case? Perhaps it was telling that Andreas Christensen and Kurt Zouma started the final preseason game, against Borussia Monchengladbach and David Luiz didn't even make an appearance (neither did Fikayo Tomori). David Luiz did start against both Barcelona and RB Salzburg, but perhaps he did not impress enough? Antonio Rudiger's return to training, at least in some part, is almost serendipitous timing as well. He remains a guaranteed starter when fit.

Matt Law
@Matt_Law_DT
I really like how Frank Lampard has handled this David Luiz situation. You’re not with me? Fine, do one. My kind of management.

3,715
7:30 PM – Aug 7, 2019
Twitter Ads info and privacy
883 people are talking about this
Either way, there appears to be some disagreement between player and head coach. David Luiz left PSG three years ago precisely because he wasn't going to be first-choice anymore. He stayed last summer because Sarri convinced him he would be.

Could a similar situation be playing out now?
Dan Levene
@danlevene
· 15h
Spoke to David Luiz in Dublin, following the St Pats game, and found him unusually distracted.

Was clear something wasn’t quite right.
Now we have widespread reports he refused training today, and wants off to Arsenal.

He’s not had a good pre-season – could this explain that?

Dan Levene
@danlevene
A little clarification needed…
Am told David Luiz trained separate from the team today. But that wasn’t his own choice.

Reports he’s ‘gone on strike’ are therefore wide of the mark.

But it does sound like a case of a player whose head has been turned.