Chelsea: David Luiz refuses to train with Chelsea to push through transfer to Arsenal 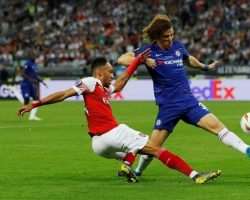 David Luiz failed to show up for Chelsea training in a bid to push through a transfer to Arsenal.

The Blues centre-back has been in talks to leave Stamford Bridge his summer and is hoping to secure a move to north London.

The Gunners are in desperate need of strengthening their defence following the departure of Laurent Koscielny.

Arsenal have submitted a bid for Luiz – which the Brazilian is aware of – prompting him to make the decision not to train with Chelsea.

The transfer window slams shut on Thursday and the centre-back knows he is short on time to complete a move away from Chelsea.

“It’s great to see him here,” said Luiz. “He’s someone who knows what it means to be at Chelsea and understands the DNA of this club.

We are working well so far, everyone is getting along and the sessions have been great.

“Lamps, or should I say ‘Gaffer’, is now our leader and he’s going to try to do everything he can like he did when he was a player, and now it’s up to us to help him build the spirit and the philosophy around the club to be successful.

“He was a leader as a player, so already he was trying to do his best for the team and it’s not a surprise to see him as a manager.

In fact I think it’s great. It’s fantastic to see players who know Chelsea so well coming back to the club, particularly leaders like Lamps and Petr [Cech].

“They will be great for us, and they will continue to do their job as best as they can, just wearing a different shirt this time!”