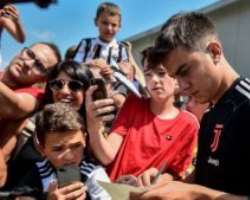 The Premier League's title race is taking a a big step toward having a legitimate third wheel.

Juventus and Tottenham Hotspur have reportedly agreed on a $78 million fee for Paulo Dybala.

Now Spurs have to convince Dybala on their project, as the star is said to be uncertain about the North London outfit and Manchester United (The Red Devils reportedly pulling out of the running earlier this week).

Dybala, 25, has been excused from Juve training until his transfer situation is resolved by the club.

The Argentinian's numbers took a big hit when Cristiano Ronaldo arrived and became the focal point of Juve's attack, but he's scored 22 goals in a season for the Old Lady and also posted a 19-goal, 9-assist season.

He's an upgrade on Dele Alli, who is injured and also coming off a down season, and should feast off the spoils of Harry Kane.

Perhaps countryman Erik Lamela can convince him of the Tottenham way?