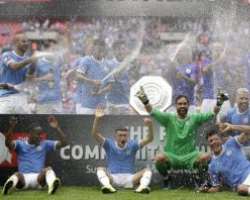 City netted all five penalties — the last by Gabriel Jesus — and backup goalkeeper Claudio Bravo made a key save on his first appearance in a year to deny Georginio Wijnaldum’s attempt in a 5-4 shootout win after the traditional curtain-raiser to the English season ended 1-1 in regulation time.

“It was a good test for both teams,” City manager Pep Guardiola said. “It’s nice for the players to realize what they will face this season. At this level the difference is nothing.”

On the field, perhaps, between the teams. Not in terms of trophy hauls in recent years.

City opened last season by lifting the Shield and went on to win the FA Cup, League Cup and Premier League — edging Liverpool to England’s top title by a single point.

Liverpool, which won the Champions League for a sixth time last season, won only one of seven pre-season games before losing to City at Wembley Stadium.

Raheem Sterling took 12 minutes to pick up where he left off for City at Wembley in May when he completed a 5-0 victory over Watford in the FA Cup final.

Kevin De Bruyne nodded across to David Silva, who flicked the ball on for Sterling to turn in from close range. It was Sterling’s first goal against the club he left four years ago and he didn’t hold back in celebrating in front of the Liverpool fans closest to the goal.

Liverpool was not only exposed in defense but wasteful up front and twice denied by the goal frame after the break when Virgil van Dijk hit the bar and Mohamed Salah struck the post.

But Bravo was beaten in the 77th minute when two defenders combined.

Van Dijk brought down Jordan Henderson’s free kick and volleyed across to Joel Matip who headed low into the net.

Liverpool was denied a winner in regulation time when Salah’s header beat Bravo but Kyle Walker scrambled back to clear from the goal-line.

“It was a really powerful performance,” Liverpool manager Jürgen Klopp said. “Both teams had a similar pre-season, traveling so much you don’t really know where you are, it’s just so intense with all the trips.

“Obviously in the second half we were in charge and full of desire. We didn’t do it, but at least we got the equalizer so it’s how it is. Penalties, a bit of luck is involved and one goalkeeper’s save decides it, but I can’t be disappointed today.”

For a game focused on raising money for good causes there was a significant amount of ill-feeling at Wembley.

The club anthems were booed by opposing fans, then the national anthem — “God Save The Queen” — was jeered by Liverpool supporters.

During the game, Guardiola was incensed when Joe Gomez launched a high challenge on David Silva — demonstrating the action with his own right foot.

Continuing to remonstrate on the field, delaying the resumption of the game, Guardiola was shown a yellow card as referee Martin Atkinson applied the new law.