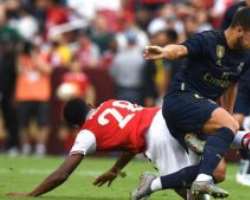 Maybe Zinedine Zidane ought to rethink his stance on Gareth Bale?

Of course it's just preseason, but the on-the-market Real Match forward subbed into Tuesday's match in Maryland on Tuesday and spearheaded a comeback 2-2 draw against Arsenal.

Real won in penalties, as all International Champions Cup matches must have a winner.

Real was down a man after 10 minutes when Nacho Fernandez handled a ball on the goal line, and Arsenal also went down a man when Sokratis Papastathopoulos saw his second yellow of the contest in the 40th minute.

Alexandre Lacazette converted a penalty, then set-up Pierre-Emerick Aubameyang for a goal 14 minutes later as the Gunners handled their business early.