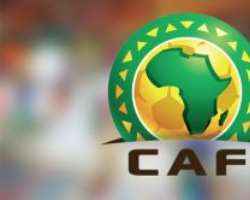 Nigeria has been drawn with Sierra Leone, Lesotho and Benin Republic in Group L of the 2021 Africa Cup of Nations (AFCON) qualifiers.

The draw took place on Thursday evening at the headquarters of the Confederation of African Football (CAF) in Cairo.

CAF Deputy General Secretary of Football and Development, Anthony Baffoe, was in charge of proceedings and he was assisted by Algerian football great Rabah Madjer, Eto'o and Nigeria's Kanu.

The 48 teams were drawn into 12 groups of four teams in addition to the four winners of the preliminary round.

In Group A, Mali will join Guinea, Namibia and the winners between Liberia and Chad for size, while Group B has Burkina Faso, Uganda, Malawi and Djibouti/Gambia.

AFCON 2019 quarter-finalists South Africa will have their hands full in Group C against Ghana and Sudan.

AFCON 2019 hosts Egypt have been paired with Kenya, Togo and Comoros Island.

While Togo and Comoros Island could not reach the 2019 Nations Cup, Kenya made the trip to Egypt but could not go farther than the group stage.

Hosts Cameroon will participate in the qualifiers even though the team are guaranteed a spot in the finals regardless of their ranking in the group.

Their matches and results will count in determining the qualification of the other teams from their groups, namely Cape Verde, Mozambique and Rwanda.

Preliminary round of the qualifiers will be played in October 2019, while the group stage will kick off in November and will end in November 2020.

The top two teams from each group will qualify for the Finals of the 33rd edition except Group F.

In that group, Cameroon automatically qualify as hosts alongside the highest placed of other three teams.

The top two teams will book their place for the 33rd edition of the championship.