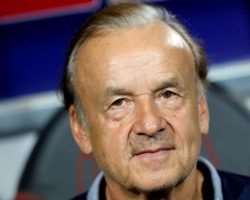 The Nigerian Football Federation may have decided to spare Super Eagles coach Gernot Rohr from sack because of $1 million release clause in contract, The Punch reported on Thursday.

Many Nigerians appear not impressed by the playing style and the achievements by the coach in both the World Cup and the African Nations Cup and have been calling for his sack.

The coach many Nigerians argue has not surpassed what had been achieved even by our own indigenous coaches.

Remarkably, coaches of both Senegal and Algeria who will play AFCON final on Friday (tomorrow) are indigenous African coaches.

The Punch reports that it reliably gathered that the German tactician, who has one-year left on his current deal has a $1m payment clause inserted in his contract should he be relieved of his post as the head coach of the team before the expiration of his new deal.

The NFF president,Amaju Pinnick, was quoted as saying on Wednesday while still at the AFCON tournament that the the 66-year-old had met the target set for him by the federation.

According to Pinnick, “He (Rohr) will remain in the job. I have complete confidence in him,” Pinnick told journalists in Egypt.

“Gernot has taken us to the semi-final, the target we set for him. Right now, we have a third-place match to play for and we intend to have our team leave Egypt with honour.

“There are some people that have been calling on me and the federation to sack Gernot. But I am not going to do that. In fact, Gernot is going on a refresher training period with Bayern Munich after the Nations Cup. We have a long-term plan with him.

“We have had rocky and difficult moments in our relationship, but this is normal in any relationship between two people.

“He is a good coach and we want him to remain with us. That said, we will work together on what needs to be improved upon.”

Telephone calls and messages sent to NFF's Director of Communications, AdemolaOlajire, on the issue were not replied as at the time of filing this report