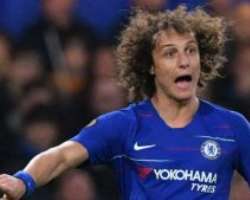 Chelsea defender David Luiz has urged the Blues’ youngsters to earn their spot in the first-team this season.

With the west London club in the middle of a summer transfer ban, new manager Frank Lampard is expected to give youth a chance, and Luiz has thrown down the gauntlet to Chelsea’s young stars.

Billy Gilmour and Mason Mount impressed in the 4-0 friendly victory over St Patrick’s Athletic on Saturday, and are just two of the club’s starlets who will be hoping for more opportunities in a bid to cement their place in the starting XI ahead of the Premier League opener against Manchester United on August 11.

Luiz has been impressed with the talent coming through at Stamford Bridge and believes the young charges, including Fikayo Tomori and Tammy Abraham, can play a major role.

“I think we are a lucky team because we have so much talent, the young players are amazing,” said Luiz.

“Every single one, they have the quality already to play for this club. I have to do my role as a senior player just trying to help them and also to do my job.

“Of course it is a big step up and it's up to everyone to do their job.”

While Lampard is expected to hand a number of opportunities to the young players throughout the campaign, Luiz insists it is up to the youngsters themselves to work hard and stay focused during the ups and downs of a gruelling season.

“I think when you're young you have to think about you opening the door – not the door opening for you. The young players have to work in this mentality. Because life is not easy.

“Every day another boy is born and another boy wants to be a footballer. And it's up to everybody to work hard and for them to knock on the door and open the door the have the talent for that they have the potential for that, they just have to show that every single day.’

Chelsea will face Barcelona in Japan on July 23 as they continue their pre-season preparations before taking on Reading, Red Bull Salzburg and Borussia Monchengladbach.