Lampard pleased with Chelsea despite draw in first game in charge 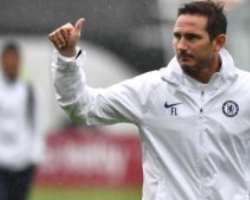 Frank Lampard was pleased with Chelsea’s performance despite a 1-1 draw against Bohemians in his first game in charge on Wednesday.

The Premier League side took an early lead through Michy Batshuayi, but Eric Molloy scored an 89th-minute equaliser for Bohemians in Dublin.

Despite the result, Lampard – in his first game as head coach of Chelsea – was satisfied with his side.

“It was a tough game for us. We haven’t been back for long and this was our first game after just a few days so there was a bit of pressure on the lads to work today,” he told Chelsea TV.

“We’ve been working them very hard and we did the same this morning as well. I want to stretch them because that’s what pre-season is all about.

“We wanted to win obviously because you always do but it’s not about that at this point – it’s about individuals getting fit and pushing themselves to the limit.

“We were pleased with the outcome and I thought some of the performances, particularly from some of the young lads, were really good.”

Lampard used 22 different players during the pre-season friendly as he tested his squad at Dalymount Park.

The club great, whose side next face St Patrick’s Athletic on Saturday, said he was pleased with his players’ desire to learn.

“We’ve been really happy with them,” Lampard said. “I have a way of working that can be taxing on the players and we wanted to get straight into it.

“We have to because we want fitness and intensity in our game. I’m happy not just with how they’ve practically done things but with their attitude in taking everything on.”