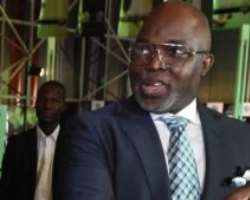 The Federal High Court in Abuja on Mondayb issued a bench warrant for the arrest of the President of the Nigeria Football Federation (NFF), following a case of misappropriating funds belonging to the football body.

This is coming just a day after the lowly- rated Madagascar defeated Nigeria’s Super Eagles 2-0 at the ongoing African Nations Cup tournament in Egypt.

Justice Ijeoma Ojukwu ordered on Monday that Pinnick and four other officials of the nation’s football governing body, NFF Secretary, Sunusi Mohammed; the 1st Vice-President, Seyi Akinwumi; the 2nd Vice-President, Shehu Dikko and an Executive member, Yusuff Fresh be arrested after they were absent in court, for another time time.

This followed a 17-count charge, filed by the Federal Government, claiming that the officials made away with the money, allegedly paid in by the Fédération Internationale de Football Association (FIFA) to the NFF as appearance fees in the group state of the Russia 2018 World Cup.

Pinnick, who is presently in Egypt overseeing Confederation of African Football (CAF) duties was not in court when the case, marked, FHC/ABJ/CR/93/2019, came up againg before the court to answere to the charges.

The missing amount included $8,400,000 and N4billion, which the defendants were said to have moved “dishonestly and intentionally the sum of about N4bn” belonging to the NFF without the consent of the NFF