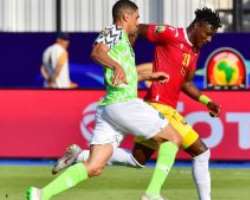 Their victory came through a headed effort by Kenneth Omeruo on 73rd minutes from a corner kick which resulted from unrelenting pressure on the Guinean half in the second half.

Gernot Rohr who is the Super Eagles coach decided not to start Mikel Obi and Troost Ekong in this game against Guinea as Alex Iwobi had the chance to play in the middle.

Moses Simon, who had taken several fruitless corner kicks in the match delivered a perfect one this time around.

Omeruo jumped highest to meet the ball from the corner kick and finished behind the helpless keeper with a fine header inside the left post. The defence stared motionlessly at each other. It was a peach of a goal.

On 61st minute, Alex Iwobi received a low pass just outside the box and unleashed a fine strike towards the right post. Ibrahim Kone pulled off a reflexive save to block his effort.

Ibrahima Traore, on 82nd minute attempted to find one of his teammates with a ball from a free kick outside the box. The Nigerian goalkeeper, Daniel Akpeyi climbed high above all players in the box to intercept the cross and snuff out the opportunity.

Earlier in the first half, Iwobi picked up a pass and had an effort from the edge of the box, but Kone got down to his right to keep it out to give Nigeria a corner kick.

On 32 minutes, Nigerian striker, Odion Ighalo spurned a good chance. He got a shot away from inside the penalty box, but it went inches wide off the right post.

The Guineans, with 52 percent possession to Nigeria's 48 percent could not dent the Super Eagles solid defence throughout the match as an improved Eagles had 10 goal attempts to the Guineans' eight, while shot on target was five apiece for both sides. The Super Eagles also had 10 corner kicks to one for the Guineans.

The result leaves Guinea, who may be without Naby Keita for their final game, facing an anxious wait to see what transpires between Madagascar and Burundi on Thursday.

Madagascar currently occupy the second automatic qualifying spot with Guinea in third and could seriously complicate the Elephants’ chances of reaching the last 16 with victory in the same stadium.

The Super Eagles meanwhile can take it easy in their final fixture against Madagascar with their knock-out stage participation already assured.

The Super Eagles thus, become the first team to reach the Round of 16 at the ongoing AFCON.