Chelsea get permission from Derby to hold Frank Lampard talks 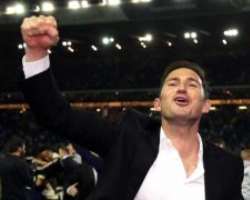 Frank Lampard's widely anticipated move to Chelsea has edged towards its completion after Derby granted him permission to open talks with the London club regarding their managerial vacancy.

Derby made a statement to confirm the development and they added that “with pre-season fast approaching for both clubs, it is hoped this will allow Chelsea to swiftly conclude their discussions”.That is certainly the expectation on the side of Chelsea, who have moved for Lampard, their former midfield favourite, after allowing Maurizio Sarri to join Juventus after one fitful, if ultimately successful, season. Sarri returned the club to the Champions League with a third-placed Premier League finish and won the Europa League.

Chelsea are ready to pay a compensation fee of £4m to Derby for Lampard and they could unveil him this week.

Lampard enjoyed an encouraging first season in management at Derby, taking them to the Championship play-off final, which they lost to Aston Villa. His impact has been profound, particularly on the players, who have admired his professionalism and enjoyed working with him. He has transformed the team's style of play.

In their hearts, though, the players have known it would be difficult for Lampard to turn down Chelsea, for whom he scored a record 211 goals in 649 appearances over 13 years, and Lampard's return to Stamford Bridge looks like a formality.

Lampard's managerial inexperience is well-documented and, in other circumstances, the Chelsea hierarchy might have preferred to have waited for him. But he came to be their No 1 candidate, as other targets – including Massimiliano Allegri – proved out of reach. Allegri has announced that he will take a year out from football after stepping down from the Juventus job.

Lampard's appeal is obvious on a romantic level and it is clear that he will galvanise a Chelsea fanbase which grew frustrated with Sarri's sometimes ponderous football. But more practically, with the club set to serve a Fifa transfer ban for breaches of the rules regarding the registration of under-18 foreign players, it is expected that Lampard will embrace the necessity of promoting academy products.

The Fiver: sign up and get our daily football email.

Lampard worked productively at Derby with Mason Mount and Fikayo Tomori, who were on loan from Stamford Bridge, and he knows that he will most likely have to lean on other talents such as Reece James and Tammy Abraham – together with Callum Hudson-Odoi when he recovers from achilles surgery.

Lampard would like to bring his Derby assistant Jody Morris – another former Chelsea player and Under-18s coach – to Stamford Bridge, along with the fitness coach, Chris Jones. Chelsea's players are scheduled to start returning for pre-season training next week.