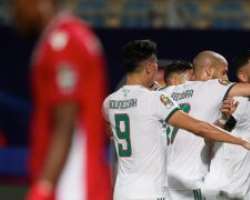 Riyad Mahrez led Algeria to a comfortable 2-0 victory over Kenya as they opened their Africa Cup of Nations finals campaign on Sunday in Cairo.

It was a competent display in this Group C match.
Team captain Mahrez netted the second goal just before half-time after striker Baghdad Bounedjah had opened the scoring with a 34th minute penalty kick.

Kenya midfielder Dennis Odhiambo gave away the spot kick with an errant tackle on Youcef Atal.

Atal had made a run down the right wing before cutting inside and forcing the Kenyan into a clumsy attempt to stop him.

Mahrez netted the second nine minutes later as he ghosted unmarked into the penalty area to lash in a pass that was pulled back from the byline.

Mahrez's powerful shot took a deflection off Kenya full-back Aboud Omar as it flew into the net.

It was as much as Algeria deserved with an overwhelming showing against the Kenyans, who looked largely outclassed on their return to the finals for the first time in 15 years.

Algeria's strong pressing forced Kenya to constantly turn over possession and never gave them an opportunity to create any chances.

Kenya's only promising attack came with just six minutes left when Ayub Timbe's run down the right wing set up a chance for Michael Olunga.

But he was thwarted by the Algerian defence.
Earlier on Sunday, Senegal beat Kenya's neighbours Tanzania 2-0 in the opening Group C match at the same venue in another one-sided meeting.

Keita Balde put them ahead in the first half and Krepin Diatta rifled a shot through a crowd of players for the second just after the hour to confirm Senegal's dominance.

Algeria and Senegal meet next in Cairo on Thursday.

Meanwhile, Tanzania's Taifa Stars failed to shine in their return to the AFCON when the Ternaga Lions of Senegal proved too strong for them in their first fixture at the tournament.

Two goals – one in each half – ensured that Aliou Cisse's charges secured three points. The goals were scored by Balde (28') and a screamer by Diatta (65').

Diatta was named man of the match in a game that analysts say underlines the potential of the Senegalese team as potential contenders for the trophy.

It was a game with two African coaches, Senegal's Cisse and Tanzania's Emmanuel Amunike but at the end of proceedings, it was Cisse who took home the three points.

The Atlas Lions of Morocco could only count on an own goal to secure three points against Namibia on Sunday in their Group D fixture at the Al Salam Stadium in Cairo.

When Keimuine hit the ball past his own goalie in the 89th minute, Moroccans celebrated but for a resolute Namibian side, it was a case of heartbreak on Day 1 of their return to the AFCON.

Two Group C matches are expected later as Senegal take on Tanzania and Algeria face off with Kenya.

In photo; Players of Algerian national team celebrate their victory over Kenya

Players of Algerian national team celebrate their victory over Kenya