No VAR for keeper encroachment at penalties in Premier League, says PGMOL 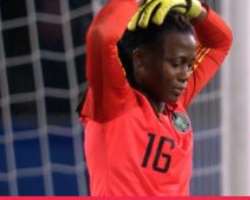 The Premier League will not use video assistant referees in 2019-20 to rule on goalkeepers moving off their line to save a penalty.

Three penalties have been retaken at the Women’s World Cup after VAR ruled keepers did not have at least part of one foot on the goalline.

PGMOL could review the situation during the season.

VAR will be used in the Premier League for the first time during 2019-20 but there are no plans to use it in Scotland’s Premiership next season.

Why has this become an issue?
World football’s law-making body, the International Football Association Board, introduced a new rule shortly before the Women’s World Cup on the issue of goalkeeper encroachment at penalties.

It stated keepers must have at least one foot on the goalline when a penalty is taken or, if they are jumping at the time of contact, have one foot in line with it.

World football’s governing body, Fifa, has focused on this during the tournament in France, with some referees warning keepers immediately before spot-kicks.

Why the controversy?
Scotland were knocked out of the World Cup on Wednesday after keeper Lee Alexander initially saved a stoppage-time spot-kick from Argentina’s Florencia Bonsegundo, only for the referee to order a retake because Alexander was judged not to have had at least part of one foot on the goalline.

Bonsegundo scored with the second attempt to ensure the match finished 3-3, eliminating Scotland.

France benefitted from a similar situation in a group game when a penalty against Nigeria hit the post.

Nigeria keeper Chiamaka Nnadozie was ruled to have moved off her line early by VAR and Wendie Renard scored the winner from the second spot-kick.

Italy also scored their first in a 5-0 win over Jamaica with a retaken penalty after goalkeeper Sydney Schneider was punished for moving off her line in saving the initial spot-kick.

‘A World Cup decided by VAR’ – what do pundits say?

“It has never been easier, in the history of football, to score a penalty kick than it is now,” said BBC Sport pundit Pat Nevin.

“If the goalkeeper has to stand on that line and can’t stand behind it, it’s almost like saying ‘we’re going to tie your hands behind your back next time’ just to make it even harder.

“I think it’s really harsh on the goalkeepers just now, and that’s coming from somebody who used to try to take penalties badly.”

Former Scotland Women’s keeper Gemma Fay added: “I understand the letter of the law, but as a goalkeeper thank goodness I am no longer playing because this is beyond ridiculous.

“I think we’re going to have this World Cup decided by VAR by inexperienced officials who haven’t had the opportunity to work with this.

“Football should decide this World Cup, not VAR.”

Manchester United Women’s keeper Siobhan Chamberlain, who was in the England squads for the 2011 and 2015 World Cups, wrote on Twitter: “From a GK’s perspective you’re trying to read the players movement, body shape and run up but if you can’t react until after they’ve kicked it, you’re never going to be able to move in time.

“A penalty is already massively weighted in favour of the attacker. Do they need more?”

What are the new rules?
The goalkeeper must have one of his/her feet partly on the goalline (or above it if jumping) when the kick is taken. They cannot stand behind or in front of the line.

The VAR can only penalise “encroachment by an attacker or defender who becomes directly involved in play if the penalty kick rebounds from the goalpost, crossbar or goalkeeper”.

In other tweaks to the penalty laws, the kick cannot be taken while the goalkeeper is touching the woodwork or nets – or if the net or posts are still moving after being touched.