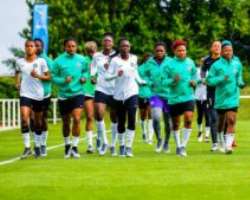 The gallant falcons played their best game of the on-going FIFA Women World Cup in France, but at the end, the Super Falcons, reduced to 10 players in the second half, succumbed to the hosts via a debatable penalty kick on Monday.

France's reputation suggested they would take Nigeria to the cleaners in their last group game, but the hosts met in the Super Falcons a team hungry for passage to the second round of the competition.

With the exit of South Africa, who lost their last group game to Germany earlier in the day, the onus was on Nigeria to maintain Africa's presence in the competition. That would become clear after all the group games, as the Super Falcons now fall among the third placed teams that could move to the second round as best losers.

However, that fate could have been avoided but for a referee, who saw things differently from Nigeria's perspective.

The match was heading to a goalless draw until the 79th minute when Honduran referee Melissa Borjas' decided that Nigeria's Ngozi Ebere fouled Viviane Asseyi in the box. Ebere was sent off, but the drama did not end there as Borjas ordered a replay of the kick after Wendle Renard had lost her first attempt.

Goalkeeper Chiamaka Nnadozie, a youth international, who was drafted in as first choice stopper after the first game, showed she has the heart for the big occasion with her positioning, reflexes and interception in the game dominated by France.

This was an unconvincing display by Corinne Diacre's side against a team ranked 38th in the world, with France guilty of wasteful finishing before late drama in Brittany.

Speaking at the end of the game, Super Falcons' Coach, Thomas Dennerby described his girls as heroines following their gallant display.

He said: “I have nothing but pride over the performance of these girls. Even with 10 players, they still held their own against one of the best teams in the world.

“We now have to wait to see what happens in the other groups. It is no longer in our hands.”

Also speaking after the game, French coach, Corinne Diacre admitted that they got more than they bargained for from Nigeria. She also spoke on the controversial VAR rule that gave her side victory.