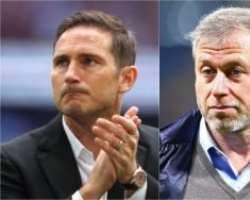 Frank Lampard has agreed to become Chelsea's new manager after holding talks with Roman Abramovich, according to reports. Chelsea are searching for another new boss after allowing Maurizio Sarri to join Juventus for a compensation fee. According to The Sunday Times, Abramovich has taken a more hands-on role with finding Sarri's successor and had a phone call with Lampard last week in which he asked the 40-year-old to return to Stamford Bridge. The report claims that Abramovich promised Lampard that he will be given at least two seasons at Chelsea, which means he will still be in charge after the club have served their two-window transfer ban.

Lampard has two years remaining on his current contract with Derby County and Chelsea have not yet agreed a compensation package with the Championship club. The former midfielder, who made 648 appearances for Chelsea, guided Derby to the Championship play-off final this season but missed out on promotion after a defeat to Aston Villa. Petr Cech, who is ready to take up his new technical director role at Chelsea, reportedly pushed for Lampard's appointment to both Abramovich and the club's chief executive Marina Granovskaia.

The report also claims that Didier Drogba has been offered the chance to return as a first-team coach, while Lampard will bring Jody Morris, his assistant at Derby, with him to Stamford Bridge. Morris already has a strong relationship with Chelsea's youth players having spent four years at the club's academy before leaving to join Derby last year. Lampard is also keen to bring Shay Given with him to Chelsea as a goalkeeper coach.