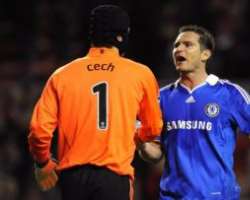 Chelsea's move to appoint Frank Lampard as their new manager has reportedly been given the seal of approval by incoming sporting director Petr Cech. The legendary Czech goalkeeper announced earlier this year that he was retiring at the end of the season, with his final appearance for Arsenal coming in the Europa League final defeat to Chelsea. But Cech won't be out of work for long, with the 37-year-old having been offered the newly created role of sporting director at Stamford Bridge.

While Cech has not yet officially started his job, one of the first matters on his agenda will be finding a new manager to replace Maurizio Sarri, who is on the verge of taking over at Juventus.

And according to The Sun, Chelsea owner Roman Abramovich and CEO Marina Granovskaia have already spoken to Cech about who should take over the reins when Sarri leaves. MORE: FOOTBALL Unai Emery under pressure to sell Arsenal star as Gunners face £50m losses The likes of Javi Gracia and Nuno Espirito Santo have been linked with the job, but Cech has lobbied for Lampard to be put in charge despite his lack of experience. He has impressed in his first managerial season in charge of Derby County, narrowly missing out on promotion to the Premier League after losing the play-off final to Aston Villa.

Lampard moulded a young, hard-working side that featured two Chelsea loanees – Fikayo Tomori and Mason Mount – and the next manager will need to rely on the club's youth prospects as they face up to a two-window transfer ban.

Former Chelsea youth coach Jody Morris, who is Lampard's assistant at Derby, will also follow him back to Stamford Bridge, while the former Blues midfielder has also spoken to Didier Drogba about joining his backroom team