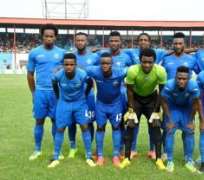 The win means that Enyimba ended the NPFL Super Six Championship Playoffs with 12 points from 5 matches.

It was the record eighth Nigeria league crown of Enyimba and the club is expected to represent the country in the 2020 CAF Champions League.

“The People's Elephant' beat Akwa United 3-0 at the Agege Stadium in Lagos to record an unassailable 12 points from five matches in the championship playoffs.

Kano Pillars and Enugu Rangers are also expected to join Enyimba to play international football next year after the final playoff game between Pillars and Lobi Stars today.

Rangers have eight points from five matches, while Pillars are on the same points with a game to spare.

The champions and runners-up of the championship playoffs will feature in the CAF Champions League, while the third-placed team will play in the CAF Confederation. NAN