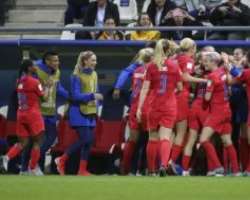 Tuesday, the USA were responsible for the biggest demolition job in the history of the Women's World Cup.

As the Americans bagged their 13th – and final – goal of the game against tournament debutants Thailand, social media exploded with a mixture of shock, amazement, admiration and condemnation.

But as Jill Ellis's World Cup holders and favourites burst onto the World Cup scene, it begged the question – how many is too many?

What is clear is that Ellis and co wanted to let the world know they meant business. The English-born coach was brimming with pride when she spoke to reporters post-match.

“It was awesome,” said the 52-year-old. “You want your forwards hot in a tournament and it’s a great start, especially for Morgan. Hopefully she carries it on through the finals.